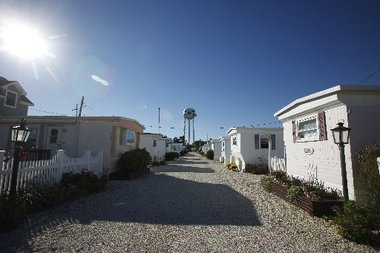 A decade ago, Blackstone Group Inc. became America’s largest landlord, purchasing tens of thousands of single-family homes during the foreclosure crisis. Now the private equity firm has spotted the next big opportunity as the virus-induced recession crushes the working poor, that is, betting on mobile-home parks.

The alternative asset manager has made a drastic shift in investment focus in the last 12 months. This time last year, Blackstone was bidding on a portfolio of luxury hotels – now they’re in talks to purchase up to 40 mobile-home parks from Summit Communities for $550 million, according to Bloomberg, who spoke with several people with direct knowledge.

Sources said Blackstone could make the purchase through a vehicle known as Blackstone Real Estate Income Trust (BREIT). If the private equity firm purchases the portfolio, many of the properties will undergo upgrades.

“Though our investments in this asset class are very limited, we are proud to partner with a best in class operator and plan to invest significant capital into these communities – which are largely occupied by seasonal residents and retirees – to create high-quality housing in places where people want to live,” Blackstone said in a statement.

One source said the deal has yet to be finalized and could still fall through. Interest among Blackstone to acquire mobile-home parks comes as it acquired seven parks, worth $200 million, in Florida and Arizona, earlier this year.

Real estate company JLL said mobile-home parks have been the hottest space within commercial real estate this year. Many firms, like Blackstone, are avoiding malls, hotels, and other retail properties.

2018 marked the year when Blackstone dove headfirst with a bet on mobile-home parks, purchasing 14 communities sold by Tricon Capital Group Inc. The private equity firm owns a little less than 1% of the manufactured housing market.

Blackstone is set to capitalize on the trend of working-poor Americans downsizing into doublewide trailers.